Genomic instability is a hallmark of human cancer. But how does genomic instability develop and impact the initiation and progression of cancer? And does it provide opportunities for therapeutic intervention? We study two causes of genomic instability, both related to perturbed DNA replication: (1) loss of DNA mismatch repair (MMR) leading to increased mutagenesis, and (2) defective G1/S control causing unscheduled S-phase entry, replication stress and DNA breakage. We develop novel gene modification tools to study genomic instability in cell culture and mouse models.

Oligonucleotide-directed gene modification
As a spin-off of our work on MMR, we have developed a gene modification technique that allows substitution of any desired single base-pair without the need for prior generation of a DNA double-stranded break. The method only uses short synthetic oligodeoxyribonucleotides (ssODN) that are complementary to the endogenous target sequence except for the centrally located nucleotide that comprises the desired modification (Aarts and Te Riele, NAR 2010). Gene modification involves annealing of the ssODN to its complementary sequence in the replication fork and subsequent integration. However, the mismatch at the position of the mutating nucleotide elicits a MMR reaction that restricts gene modification to a frequency of 10-7 (Dekker et al., NAR 2003). Cells can be made permissive for ‘oligo targeting’ by transient suppression of MSH2 (Aarts et al., NAR 2006) or MLH1 (Dekker et al., Mutation Res 2011), increasing the frequency to 10-5 but at the cost of spontaneous, potentially confounding mutations. We found the effect of MMR can completely be avoided when the mutating nucleotide in the ssODN is a locked nucleic acid (LNA). LNA-modified ssODNs (LMOs) of only 21 nucleotides allow highly accurate base-pair substitution at frequencies of 10-3 in wild-type cells, while MMR suppresses off-target effects (Van Ravesteyn et al., PNAS 2016). The ssODN also contains an 5’ acridine group to improve annealing (Figure 1). Also in Escherichia coli the LMO design evades MMR during λ Red-mediated gene editing. While originally being developed in mouse embryonic stem cells (ESCs), we recently extended oligo targeting to a human diploid cell line, that we termed DIP1. 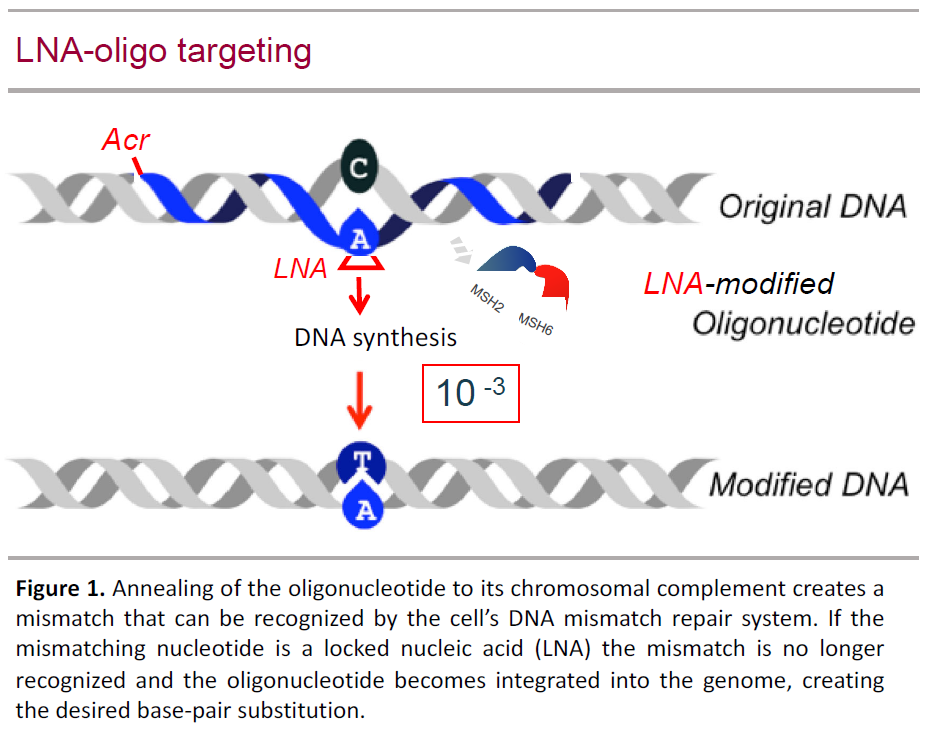 Unclassified variants of MMR genes
We use oligo targeting to study so-called ‘variants of uncertain (clinical) significance’ (VUS) of MMR genes that are found in suspected LS patients. Evidently deleterious germ-line defects in MMR genes (e.g., protein-deleting or -truncating) allow for the clinical diagnosis LS and carriers can be offered surveillance to reduce cancer risk. However, single codon variants are difficult to interpret complicating the counseling of carriers as long as it is uncertain whether the variant is disease-causing or innocuous. To study such ‘Variants of uncertain significance’ (VUS), we developed an oligo-targeting-based screen: “oligonucleotide-directed mutation screening” (ODMS) (Houlleberghs et al., PNAS 2016; PLoS Genet 2017; J Med Genet 2020). In our current protocol, we first design an appropriate LMO to introduce the VUS into ±0. 1% of human diploid cells that were made hemizygous for a MMR gene. When the VUS is deleterious, modified cells form colonies in MNNG-containing medium; when no colonies appear, all cells remained MMR proficient indicating the VUS is innocuous. We are constantly improving this protocol and are implementing ODMS in clinical practice as a routine diagnostic tool with the help of a nationwide Dutch-Cancer-Society-sponsored consortium, termed INVUSE (“investigating variants of uncertain significance for use in clinical practice”).

A novel mouse model for Lynch syndrome
We generated a novel mouse model in which, similar to LS patients, MSH2-defective crypts arise amidst an excess of MMR-proficient crypts (ratio 1:20) (Wojciechowicz et al., Gastroenterology 2014). Half of these animals spontaneously developed MSH2-deficient intestinal tumors after ±1.5 year. Exposure of “Msh2-Lynch” mice to the methylating agent temozolomide caused 5-fold expansion of MSH2-deficient crypts and dramatically accelerated intestinal tumorigenesis, reducing the latency to ± 4 months in all animals. Exposure to methylating agents is clearly a risk factor for tumor development in LS patients. Remarkably, tumor incidence was strongly reduced when animals were sanitized and housed under SPF conditions. We are currently investigating which environmental factors impact tumor development. Ultimately this work may yield prophylactic strategies to reduce cancer risk in LS patients. 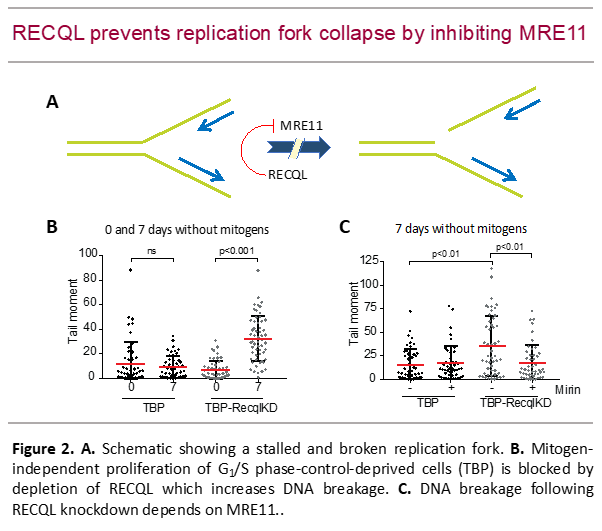