Whole genome sequencing is reliable, has added value, and can be embedded perfectly into everyday pathology diagnostics

With the rapidly expanding tableau of (increasingly tumor-agnostic) targeted therapies, genome-driven cancer care has become the cornerstone of modern precision oncology. This means that the laboratory tests used to detect these errors in patients will also need to be updated constantly, making it a challenge for pathology departments to stay up to date. A new test, based on whole genome sequencing (WGS), can measure all DNA errors in a tumor, all in one go. This technique appears to be perfectly embeddable in the clinic’s everyday pathological diagnostics, as the WIDE study showed, conducted among 1200 patients at the Netherlands Cancer Institute in Amsterdam. The test also proved to be reliable, and offers added value in diagnostics and treatment of patients with metastatic cancers. This makes whole genome sequencing attainable to physicians and patients in regular oncological care.

We are seeing a great number of newly developed cancer drugs that target specific DNA errors in a particular patient's tumor. This influx of new medicines can make things more challenging for molecular pathologists, as pathologists Kim Monkhorst and Gerrit Meijer know. The two of them led the WIDE trial, in collaboration with Hartwig Medical Foundation.

Monkhorst: "After a new lead for a drug has been discovered, pathologists will have to adapt their tests, which is a huge amount of work. By mapping out the entire tumor DNA at once through Whole Genome Sequencing, you can avoid that problem – one test and you’re done, now and in the future. Additionally, the WGS test delivers great quality.”

Couple of minor adjustments in method

Until now, Whole Genome Sequencing has been used primarily in clinical trials, such as the CPCT-02 and DRUP trials, in which patients received treatment regardless of their tumor type. In the WIDE study, the Netherlands Cancer Institute – in collaboration with Hartwig Medical Foundation – demonstrated that a few minor adjustments to the laboratory's working methods allowed this technique to be embedded perfectly in diagnostic pathology and in daily clinical practice. The researchers also validated the technique and showed that it offers added value to the diagnosis of metastatic cancer.

For pathologists, the WGS test will mean working with frozen tissue samples instead of tissue fixed in formalin. Adapting the working method in the laboratory, which had been developed as part of the WIDE study, is quite feasible, as the study showed. The turnaround time of WGS diagnostics also appears to be comparable to that of current molecular diagnostics, which means that the wait time for physicians and patients won’t be longer than usual.

In addition to being logistically and technically feasible, the WGS test also proved reliable in practice. To investigate the clinical validity of WGS diagnostics, the researchers compared them to the routine clinical diagnostics. “Our goal was a similarity of 95% in our results,” says Monkhorst. “But we ended up finding a similarity of 99.2%.”

In 2022, KWF Dutch Cancer Society invested 4.5 million euros in the analysis of the full tumor DNA in 1000 young adults with cancer, also known as AYAs. The project aimed to improve the personalization of treatment by adapting it to the tumor characteristics and creating a greater understanding of the biology of cancer in young adults. 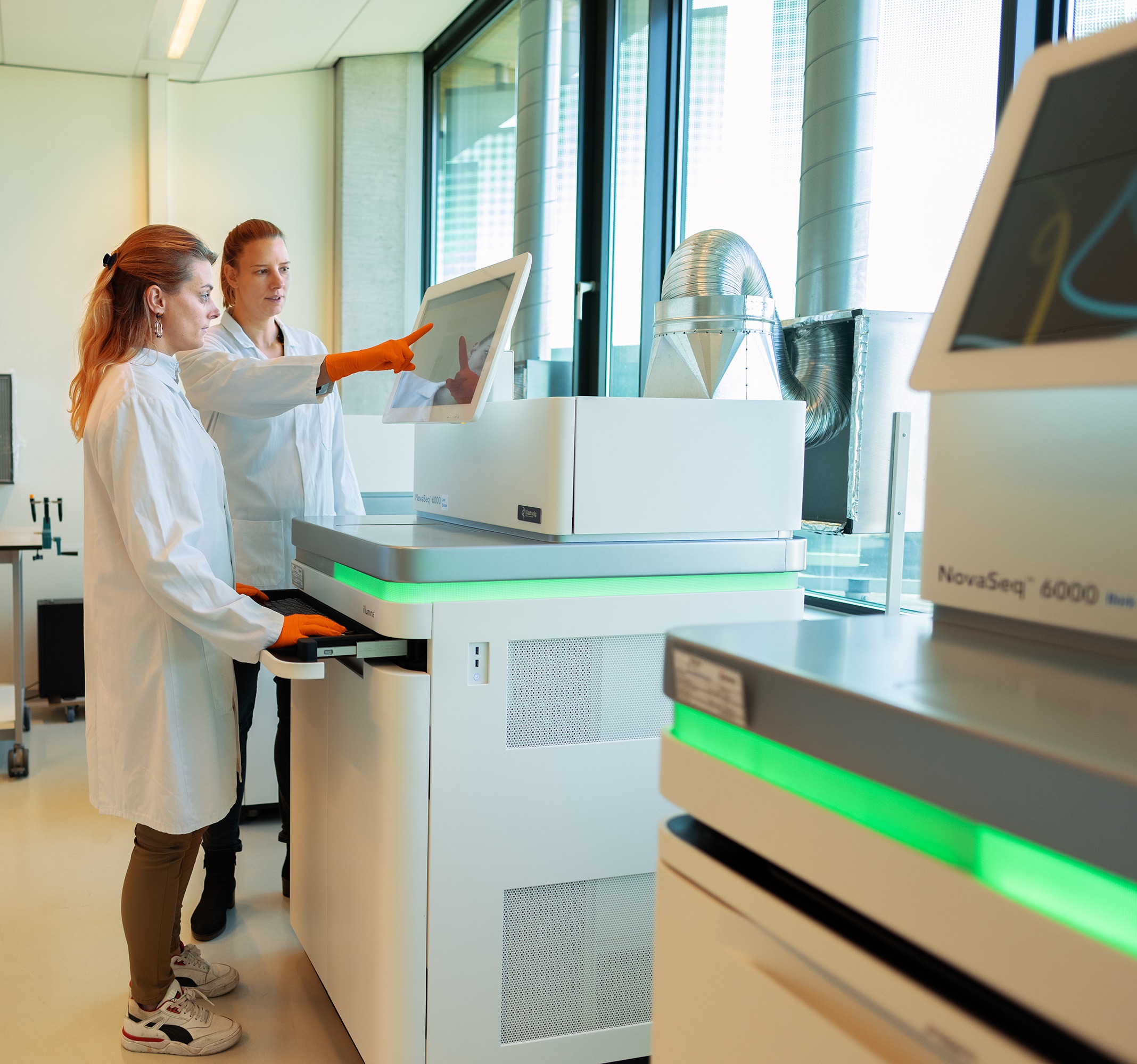 Hartwig lab techs working with a Sequencer. This device reads the DNA.

Test is objective and future-proof

Pathologist Kim Monkhorst sees a number of important advantages that Whole Genome Sequencing could offer, even beyond the way it can future-proof the lab by preventing the constant need to adapt tests after the discovery of a new drug biomarker. "The current molecular tests analyze a limited number of DNA abnormalities, with a pre-selection prepared for each tumor type. With the WGS test, you can look at the entire tumor DNA in each patient, regardless of tumor type, which allows us to find DNA errors that can be treated but that we wouldn’t normally look for. Because there is no preselection, the test is very objective.

“What’s more, whole genome sequencing could allow us to reach a diagnosis in two-thirds of patients with cancer of unknown primary (CUP), and the WGS test can even be used to assess a patient’s hereditary predisposition if necessary. Monkhorst: "We can see the whole genome sequencing test as a platform to which we can constantly add new applications.”

The test is also very valuable to use in scientific studies: all data generated can be preserved and contains every single error in the tumor DNA. Whenever a new scientific question arises, this data can be used to work towards an answer.

Sarcomas are malignant tumors in the bones or soft tissue (like fat or muscle tissue, nerves, or blood vessels). Because of the large number of subtypes, sarcoma diagnostics are tricky and mistakes are easily made. Research within the WIDE study by Luuk Schipper and prof. dr. Winette van der Graaf showed that WGS can decrease the number of errors in diagnostics. WGS application led to a change in diagnosis in 14% of all tumors analyzed, which sometimes changed the treatment plan. The technique allows for the detection of patient-specific treatment options, which allowed a number of sarcoma patients enrolled in the study to start a more experimental treatment type.

“Through the WIDE study, we have proven that the logistics of WGS can be embedded perfectly in routine pathological diagnostics, instead of exclusively using it as part of a clinical trial,” says group leader Gerrit Meijer. “We conducted the study at the Netherlands Cancer Institute, which is a specialized cancer center. But the procedures used at this hospital are no different from those available in other hospitals, and fall under the same ISO standard, meaning that the test could be made available anywhere.”

The next step will be the implementation. “WGS is a new technology, not just one specific test,” Professor Meijer emphasizes. “It’s comparable to the introduction of the MRI in radiology back in the day. Change is always difficult. We have made important progress with WIDE, but now it's down to the follow-up steps. Together with the various players in the field of health care, we are now looking into the way in which this type of diagnostics could be offered effectively and efficiently in the Netherlands. We at the NKI can serve as a template in this regard.”

About the WIDE study

The WIDE study, WGS Implementation in standard cancer Diagnostics for Every cancer patient tested the feasibility, validity, and added value of WGS in pathological diagnostic testing. This study was conducted for this purpose. It included 1200 patients with metastatic cancer from whom biopsies were taken. The WGS test was performed at the Hartwig Medical Foundation library and the results were discussed weekly in the Netherlands Cancer Institute’s Molecular Tumor Board. ZonMw invested €1.5 million in the study. The WIDE study is a collaboration between the Netherlands Cancer Institute, Hartwig Medical Foundation, and UMC Utrecht.

In January 2021, the Netherlands Cancer Institute became the first hospital in the Netherlands to already include WGS in regular diagnostics for specific indications based on the results of the WIDE study that were already available at the time.

This research was financially supported by ZonMw and Hartwig Medical Foundation.