Microscopy image of the actin skeleton, with nucleus in blue.

“Mystery gene” matures the skeleton of the cell

“I'm a professional pin-in-a-haystack seeker,” geneticist Thijn Brummelkamp responds when asked why he excels at tracking down proteins and genes that other people did not find, despite the fact that some have managed to remain elusive for as long as forty years. His research group at the Netherlands Cancer Institute has once again managed to track down one of these "mystery genes" - the gene that ensures that the final form of the protein actin is created, a main component of our cell skeleton. 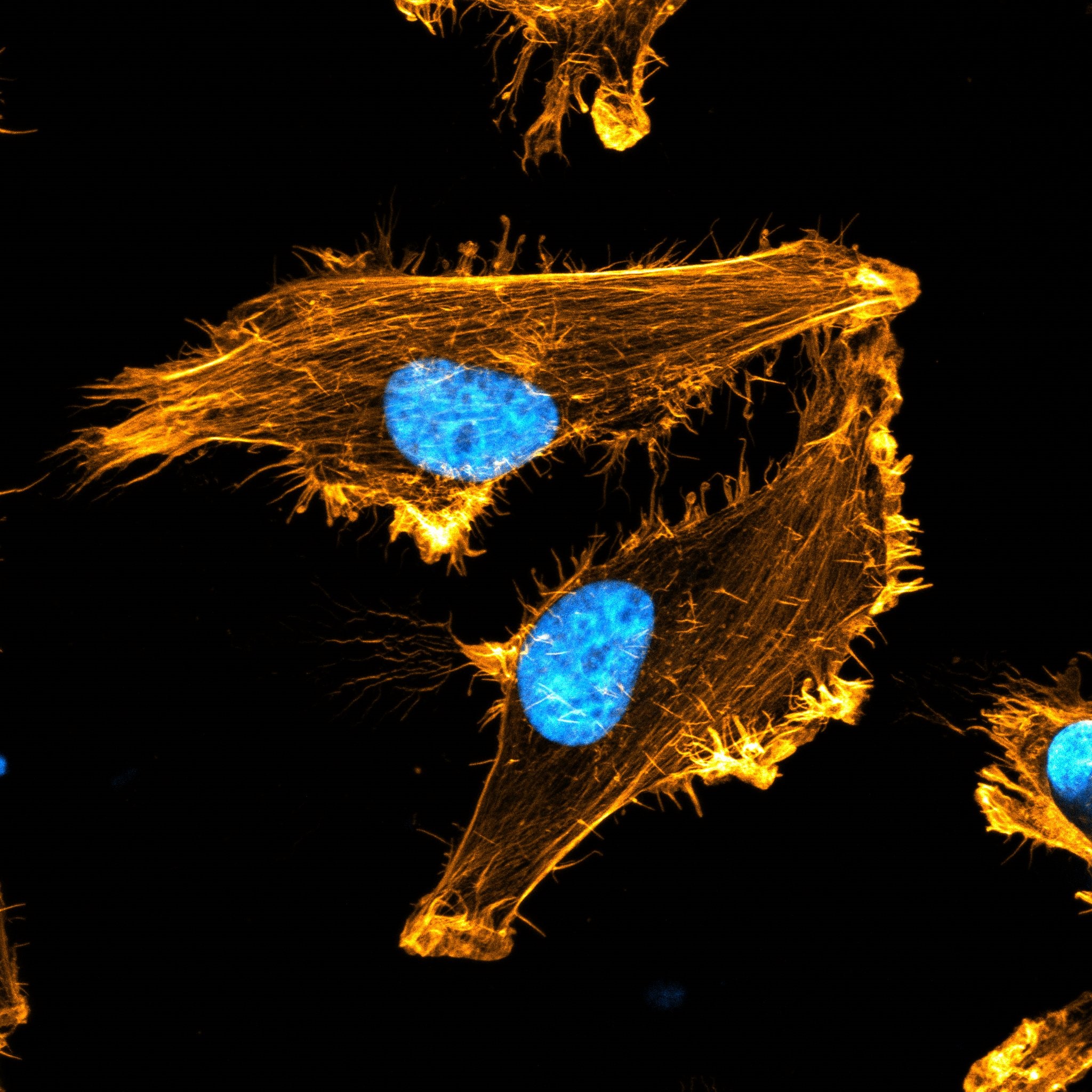 Microscopy image of the actin skeleton, with nucleus in blue.

Cell biologists are very interested in actin, because actin – a protein of which we produce more than 100 kilograms in our lifetime - is a main component of the cell skeleton and one of the most abundant molecules in a cell. Large quantities can be found in every cell type and it has many purposes: it gives shape to the cell and makes it firmer, it plays an important role in cell division, it can propel cells forward, and provides strength to our muscles. People with faulty actin proteins often suffer from muscle disease. Much is known about the function of actin, but how the final form of this important protein is made and which gene is behind it? "We didn't know," says Brummelkamp, whose mission is to find out the function of our genes.

Brummelkamp has developed a number of unique methods for this purpose over the course of his career, which allowed him to be the first to inactivate genes on a large scale for his genetics research in human cells twenty years ago. “You can’t crossbreed people like fruit flies, and see what happens.” Since 2009, Brummelkamp and his team have been using haploid cells – cells containing only one copy of each gene instead of two (one from your father and one from your mother). While this combination of two genes forms the basis of our entire existence, it also creates unwanted noise when conducting a genetics experiment because mutations usually occur in just one version of a gene (the one from your father, for example) and not the other.

Together with other researchers, Brummelkamp uses this multi-purpose method to find the genetic causes of particular conditions. He has already shown how the Ebola virus and a number of other viruses, as well as certain forms of chemotherapy, manage to enter a cell. He also investigated why cancer cells are resistant to certain types of therapy and discovered a protein found in cancer cells that acts as a brake on the immune system. This time he went looking for a gene that matures actin - and as a result, the skeleton of the cell.

In search of scissors

Before a protein is completely "finished" - or mature, as the researchers describe it in Science – and can fully perform its function in the cell, it usually has to be stripped of a specific amino acid first. This amino acid is then cut from a protein by a pair of molecular scissors. This is also what occurs with actin. It was known on which side of the actin the relevant amino acid is cut off. However, no one managed to find the enzyme that acts as scissors in this process.

Peter Haahr, postdoc in Brummelkamp's group, worked on the following experiment: first he caused random mutations (mistakes) in random haploid cells. Then he selected the cells containing the immature actin by adding a fluorescently labeled antibody to his cells that fit in the exact spot where the amino acid is cut off. As a third and final step, he investigated which gene mutated after this process.

Then came the "eureka"-moment: Haahr had traced down the molecular scissors that cut the essential amino acid from actin. Those scissors turned out to be controlled by a gene with a previously unknown function; one no researcher had ever worked with. This means that the researchers were able to name the gene themselves, and they settled on ACTMAP (ACTin MAturation Protease).

To test whether a lack of ACTMAP leads to issues in living things, they switched off the gene in mice. They observed that the actin in the cell skeleton of these mice remained unfinished, as expected. They were surprised to find that the mice did stay alive, but suffered from muscle weakness. The researchers conducted this research together with scientists from VU Amsterdam.

More scissors found in the skeleton of the cell

ACTMAP is not the first mystery gene discovered by Brummelkamp that plays a role in our cell skeleton function. Using the same method, his group has been able to detect three unknown molecular scissors over recent years that cut an amino acid from tubulin, the other main component of the cell skeleton. These scissors allow tubulin to perform its dynamic functions properly inside the cell. The last scissors (MATCAP) were discovered and described in Science this year. Through this earlier work on the cell skeleton, Brummelkamp managed to arrive at actin.

“Unfortunately, our new discovery about actin doesn’t tell us how to cure certain muscular conditions,” says Thijn Brummelkamp. “But we have provided new fundamental knowledge about the cell skeleton that may be useful to others later.” Moreover, Brummelkamp, whose mission is to be able to map out the function of all of our 23,000 genes one day, can tick another new gene off his gigantic list. After all, we don't know what half of our genes do, which means that we cannot intervene when something goes wrong.