Fabricio Loayza-Puch at the prize ceremony with René Medema, director of the Netherlands Cancer Insitute

Cancer researcher Fabricio Loayza-Puch has received this year's Antoni van Leeuwenhoek Prize (AvL prize). The AvL prize is awarded each year to one of the most highly talented young researchers of the Netherlands Cancer Institute (NKI). Loayza-Puch received the prize because he developed a technique to detect metabolic vulnerabilities of tumors.

The cells of a growing tumor are permanently 'hungry'. In part, cancer cells have the same metabolic needs as other cells in our body. For instance, all cells use glucose (sugar) as their main energy source. Cancer cells use more glucose, but normal cells also can't live without it. In contrast, cancer cells also often require high levels of specific nutrients that other cells in the body can temporarily do without. Amino acids, the building blocks of proteins, are an example of this. Each tumor needs specific amino acids for its growth. This means that if you can find out which amino acids are limiting for a certain tumor, you can use this metabolic vulnerability to quite literally starve it.

The problem is that there are many different amino acids, and that it is very hard to determine which of these are limiting for the growth of individual tumors. NKI postdoc Fabricio Loayza-Puch managed to develop a technique that can do so, for all types of tumors. The technique involves a novel use of Ribo-seq and is called Diricore. Loayza-Puch and his colleagues that were involved in the project recently published about it in Nature. For his supervisor, NKI group leader Reuven Agami, this extraordinary achievement was one of the main reasons to nominate him for the AvL Prize.

"This prize is a very nice surprise for me, I didn't expect it," says Loayza-Puch. "I didn't even know I was nominated." He stresses that the technique he developed doesn't mean that the approach of 'starving' tumors can be used in the clinic just yet. It is nearly impossible to completely remove a single type of amino acid from someone's diet. Loayza-Puch: "Therefore, what we are doing now, is to apply this technology to different types of tumors and mouse models and we expect to uncover many cancer-specific metabolic vulnerabilities. Our aim is that eventually our findings will lead to new types of anti-cancer 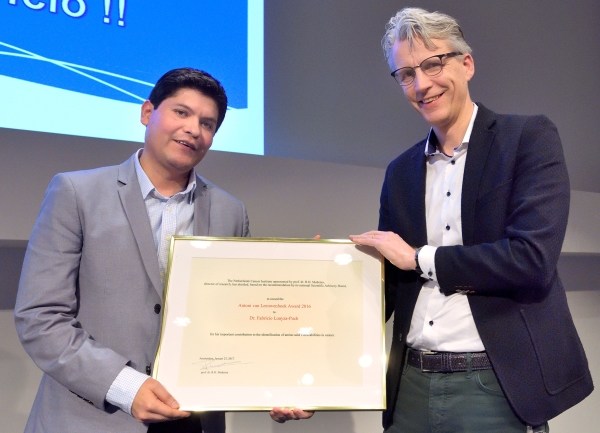 Fabricio Loayza-Puch at the prize ceremony with René Medema, director of the Netherlands Cancer Insitute

Learn how you can support cancer research

How can I help?